The film industry is one of the UK’s great strengths. As one of the sectors that make up the creative industries, it has over recent years demonstrated that it makes a significant contribution to the country’s economy, but it is beginning to show strains flowing from an acute skills shortage.

There are many factors at play which makes the UK an attractive a production base: we have award-winning craftspeople, generous Government tax breaks, a range of visually arresting locations and amazing facilities like world-renowned, Pinewood Studios. However, we now have a supply and demand dynamic at play.  The film industry is in competition with the group of tech companies we are all familiar with and grouped together under the acronym FAANG (Facebook, Amazon, Apple, Netflix and Google), and high end television drama productions.  Everyone is chasing a workforce that is not growing fast enough.

The British Film Institute (BFI), last year published a report about the skills shortage, Future Film Skills – An Action Plan – which estimates that 10,000 new entrants to the industry are needed over the next five years.  As the Creative Industries Federation reports, the key reasons contributing to this situation include “a mix of inadequate provision at schools, an underdeveloped technical education system and a lack of awareness about careers that the sector has to offer”.

So, what can careers advisors and teachers do to support a sector-wide effort to broaden reach and raise awareness of the career opportunities available to young people?

Probably one of the most important messages is that having a media, film or creative background is not a prerequisite for working in film. If a student is interested in film but not sure in what capacity, a useful exercise would be to map what subjects they like or are strong in with various roles.  You could explore maths for production accounting, business skills for producers, English for script supervisors, press and PR, and marketing.  The Creative Skillset A to Z of job roles would be the starting place for this exercise. 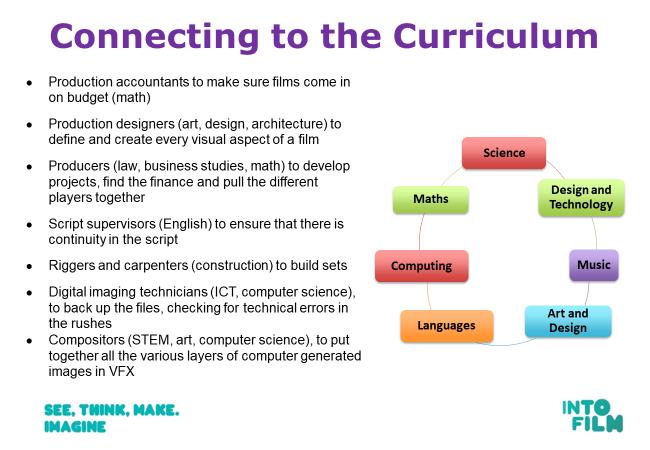 The following are a selection of trusted sources of information, useful websites and resources which will help to demystify and encourage students to seriously consider a career in the UK film industry.  We can only maintain our world-leading reputation if we draw from a wide talent pool and that is dependent on the great work of the careers service sector who can cascade, and share, this message that there are jobs in the UK film industry. You never know, that student may just one day name check you as they accept an award!

Into Film has a bank of resources about filmmaking for teachers to use in the classroom to enable students to make their first films, as well as films and podcasts from professionals about their job roles and films that they have worked on.

Creative Skillset works with the UK’s screen-based creative industries to develop skills and talent, from classroom to boardroom. It has been tasked by the BFI to deliver is Future Film Skills Action Plan.  Their Ways Into the Industry section lists the different means through which new entrants can enter the industry which you could combine with watching films about the jobs to reinforce the learning.

BAFTA Guru is the part of the British Academy of Film and Television’s which seeks to inspire anyone who is interested in film, television and games. The site is full of resources covering the full spectrum of job roles often with well-known industry professionals through masterclasses, podcasts and films. Worth checking out their series of events across the country, particularly their outreach programme BAFTA Guru Live and their various opportunities for new talent.

BFI Film Academy is the British Film Institute’s flagship scheme providing opportunities for talented and committed young people between the ages of 16–19 to develop new skills and build a career in the film industry, no matter where they live or what their background.  Bursaries are available to attend. Besides the national network programme, there is a specialist residential programme which young people can also apply to.  Check out the FAQs to help young people with their queries.

Massive Open Online Courses, better known as MOOCs can used by students to demonstrate their extra-curricular interests.  FutureLearn has teamed up with a number of institutions and organisations, including Into Film and Creative Skillset to create some free film related ones.

Pixar In a Box has also developed some similar online free learning resources based on their films. Learn how maths and physics in the classroom translates to the animated characters seen on the big screen.

The Institute of Physics has compiled a booklet explaining the role of physics in films from looking through a camera lens to knowing how real objects behave in order to digitally model them accurately to the technology used in the filmmaking process, and its importance is visual effects.

Anyone who wants to work in the film industry can equip themselves with self-taught skills and do a number of things to make them stand out from the crowd.  Here are some suggestions I give when I deliver career talks:

Yen Yau is Into Film’s Careers Manager. She has significant experience of supporting young people who are seeking to work in the film industry through outreach work, training programmes, mentoring schemes and CV surgeries. Find out more @intofilm_edu